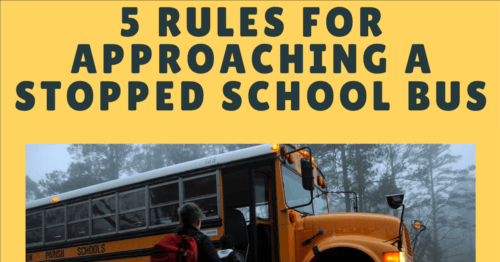 Its September, and that means back to school. School buses are returning to our roads after a longer than normal absence. While virtual learning and A/B schedules may keep some cars off the road, guidelines reduce the numbers of students per school bus. This means we should see the same number of busses on the roads as previous years.

Rule breaking drivers infuriate school bus drivers too. Imagine having the primary responsibility for the safety of 50+ students going to or coming home from school. Often students cross the road to get onto or off the bus. Having a distracted or aggressive driver pass the school bus (or worse--crash into the school bus) is a recipe for absolute disaster. We have no tolerance for inattentive rule breaking that puts people’s lives in danger.

I’ve also even seen people stopping when they shouldn’t, presumably out of an abundance of caution. That can also be dangerous if the driver behind you doesn’t expect you to stop.

This reminds us of recent tragic stories around stopped buses and injures at bus stops. In September of last year, a logging truck crashed into the rear of a SUV who was pushed into a stopped school bus, injuring fifteen students. In a close call just a couple months later, a rule-breaking logging truck driver broke the crossing gate off a stopped school bus in Lancaster.

So here they are: 5 Rules for Approaching a Stopped School Bus (along with a shareable infographic).