Last month, Walmart blamed Tracy Morgan for the injuries he received when a Walmart trucker crashed into Tracy’s vehicle. Walmart’s offensive came in a legal response to Tracy Morgan’s lawsuit.

Everyday, valid cases are filed across thousands of courthouses across our nation. Some are frivolous. However, some responses to valid lawsuits are frivolous also. These practices abuse our civil justice system and make it more difficult for deserving cases to achieve justice.

This month’s frivolous case is Morgan v. Walmart. Famed comedian and actor, Tracy Morgan is suing Walmart out of a horrific traffic collision that has been widely reported. I previously wrote about it here, 3 Things South Carolina Drivers Can Learn from Tracy Morgan’s Accident.

Walmart Says It Will Take Full Responsibility, but Legally Blames Others

Walmart’s public relations people have said that Walmart will take full-responsibility if its driver caused the collision. However, Walmart’s legal team has denied all responsibility. Worse yet, Walmart’s lawyers blamed Tracy Morgan! Walmart says that Tracy Morgan was not wearing his seat belt, and as a result, he is to blame for his injuries.

What Are The Facts

Lets take a look at the facts as they have been reported:
• Walmart’s driver was reportedly awake for 24 hours before the crash;
• The National Transportation Safety Board says that Walmart’s driver was traveling 20 miles per hour over the speed limit, in its preliminary report;
• New Jersey Police claim that Walmart’s driver was dosing and didn’t observe traffic slowing;
• New Jersey Police have charged the driver with death and assault by auto;
• People don’t wear seat belts in a limousine;
• Tracy Morgan suffered broken ribs, a broken nose, a broken leg and brain injuries—his lawyer has said he may never work again.

Here is a picture of Tracy Morgan’s damaged vehicle. I don’t want to sensationalize the crash, but I’m showing it so you can see the destruction that Walmart’s driver caused. 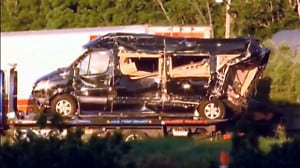 My take is that Walmart’s legal filing should be thrown out by the court. It is clear that Walmart is attempting to take as little responsibility in the courtroom while trying to publicly save face. Its actions drip with hypocrisy.

If you would like to discuss your meritorious case, please call me at 888-510-9359 or visit my website at www.brianmurphylawyer.com. Also read, 3 Things to Know Before Talking to Anyone About Your Car Accident Case or request my free South Carolina Car Accident Claims Guide in Plain English.